One of the themes throughout our consumer AR survey is the difference in sentiment between mobile AR’s users and non-users. The former show high satisfaction, demand for app functionality and willingness to pay. Non-users conversely show explicit disinterest and price sensitivity.

These findings hold important lessons for mobile AR proponents. As examined, it’s a double-edged sword: AR’s highly visceral interface captivates users. But that same orientation makes it so the advantages can’t be communicated adequately by traditional methods of product marketing.

Consumers need to experience mobile AR before they become converts, which presents logistical challenges in pushing that “first taste” on a wide scale. So it will take time for assimilation to happen naturally, though we will see accelerants such as potential killer apps that emerge.

Meanwhile, what AR development tactics could accelerate this cycle? One is to “think native.” Build new experiences around AR, rather than tacking AR to existing experiences. Also known as “AR-first,” we learned a similar lesson in “mobile-first” app design principles of the last decade.

But it goes deeper than native thinking. There are other best practices and success factors we’ve observed over the past decade. For example the “if it ain’t broke” test: If a given AR app fills a gap that wasn’t really a pain point for anyone, it could be a solution in search of a problem.

Mobile payments are one historical example of this. After lots of hype, they faced (and still face) a challenging road to ubiquity because paying by cash or credit isn’t broken. These are entrenched behaviors whose proposed replacement was only slightly better (tap versus swipe).

For mobile AR, before passing the 100x test — a high bar — we should ask if AR makes something better at all. For example, tabletop AR (e.g. battle scene on your coffee table) is compelling, but is it better than battle games that let you sit back and point the phone wherever?

Put another way, the tabletop aspect makes it novel and native, but crouching and holding up your phone isn’t ergonomic nor conducive to long/repeat sessions. The latter could overpower the former as novelty wears off while gravity doesn’t. So the bar is set high for compelling gameplay.

Speaking of novelty versus sustained value, some AR experiences lack “replayability.” For example, Google’s “Playground” AR stickers are fun, but mostly for reasons of fleeting novelty. Stickiness comes from ongoing utility, such as Google’s potential with Google Lens.

Going beyond whether something’s better in AR (AR first), another target is if it’s only possible in AR (AR only). This principle drove the killer apps of the iPhone era like Waze, Uber and Foursquare. The common element: they weren’t possible on the previous form factor, the PC.

“You couldn’t make an Uber-style app when it was on a PC,” said Niantic’s Ross Finman at TechCrunch Disrupt in late 2017. “It only made sense after a mobile platform came out. Now it’s about understanding what are the new things you can do with the mobile platform for AR.”

Product visualization apps are good examples of AR-Only: They solve a pain point — personalizing large items — and are only possible in AR. IKEA and BMW exhibit this, and are inherently monetizable as they influence buying decisions and flow into trackable commerce. Related to the question of whether or not AR makes an experience better or worse is the question of if it makes it bigger or smaller. In other words will the addition of AR features be an engagement driver and growth engine, or will it cause less people to be able to (or want to) use a given app?

Here we’ll play devil’s advocate on a topic that’s become popular in AR circles: Multi-player AR. Having synchronous AR games or experiences between multiple users is thought to open up new capabilities, and use cases for social engagement. And it could represent the first big killer app(s).

But when chasing that goal, be careful not to prevent scale. Requiring another player in close proximity could be limiting, compared to place-shifted play. So greater user compatibility, which AR needs at this stage, should accommodate remote players or spectators in addition to on-site ones.

“[With] mobile AR, you’re probably somewhere random in the house, at the office or on the move,” said Tony Parisi at last year’s AWE. “Requiring someone to be in a specific place is damn inconvenient — unless the whole point is to get you there, such as Niantic’s location-based titles.”

Finally, scale comes from reducing access friction, which Web AR will eventually do. As we’ve explored, and validated in our survey data, web AR is growing as a format. And when developing apps, consider “AR-as-a-feature” which worked well for Snapchat Lenses and Pokemon Go. 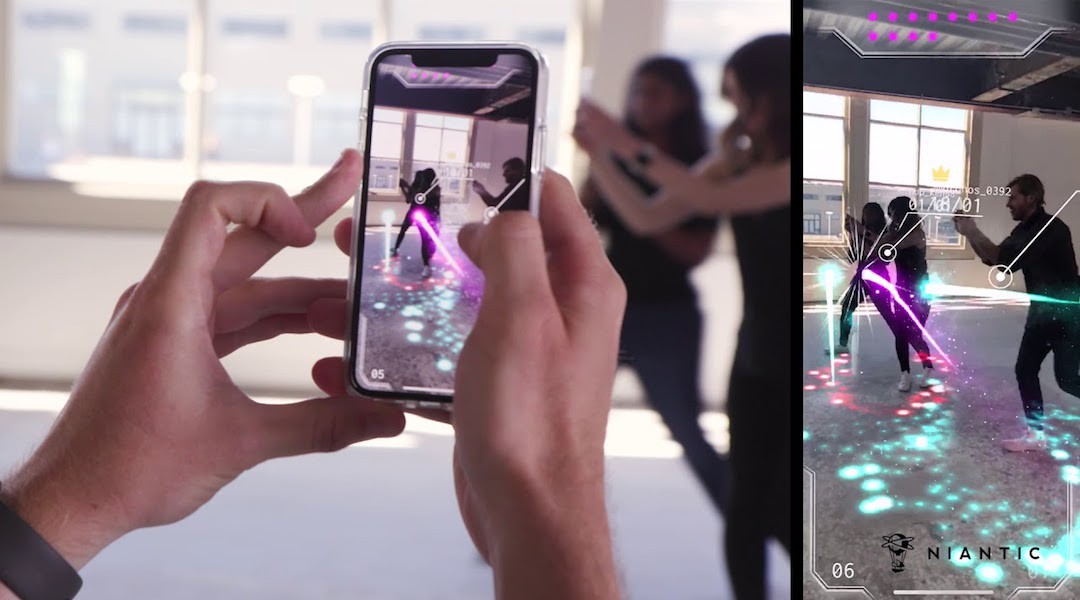 In the above market development, what everyone’s really waiting for is AR’s killer app, which we could see emerge sometime next year when AR developers truly gain their native footing. We believe the first killer apps will involve social AR, gaming or “all-day” utilities such as visual search.

As a historical comparison, it took three years after the first iPhone in 2007 before we saw killer apps, such as Waze and Uber in the 2010 timeframe. We could see killer AR apps start to emerge in that same elapsed time from 2017’s ARkit launch, which would be sometime next year.

Meanwhile, we’re not without good apps and early user traction as seen in this report. There are flashes of promise seen in product visualization apps, Google’s work with Google Lens, and “AR-first” startups like Happy Giant. Development will continue for these and other AR experiences.

“As far as AR apps and consumer-based products, I think you’re going to see a lot of crap over the next year or two,” said Niantic CTO Phil Keslin during the same TC Disrupt panel. “But you’ll see some nuggets of creative genuine things that will spark something that will truly be amazing.”